Google Screenwise: An Unwise Trade of All Your Privacy for Cash

Imagine this: an enormous tech company is tracking what you do on your phone, even when you’re not using any of its services, down to the specific images that you see. It’s also tracking all of your network traffic, because you’re installing one of its specially-designed routers. And even though some of that traffic is encrypted, it can still know what websites you visit, due to how DNS resolution works. Oh, it’s also recording audio from a custom-microphone that’s placed near your TV, and analyzing what it hears.

It’s an always-on panopticon. In exchange for your privacy (and the privacy of any guests who may be using your Internet connection, or talking near your television), you receive a gift card for a whopping $20.

No, we’re not talking about Facebook—we’ve already detailed the frightening consequences of Facebook’s sneaky, privacy-invading and security-breaking “user research” program. This is Google’s “ScreenWise Meter,” another “research program” that, much like Facebook’s, caused an upheaval this week when it was exposed.

In order to spy on iOS users, Facebook took advantage of Apple’s enterprise application program to get around Apple’s strict app distribution rules. When news of this Facebook program hit earlier this week, Google scrambled to pull the plug on its own “user research” application, which was taking advantage of the same Apple program. Apple quickly revoked both organizations’ Enterprise Certificates, shutting down all of Facebook’s and Google’s internal iOS applications and tooling, leaving the two giants in disarray.

The reason I’m asking is because I received this in the mail: 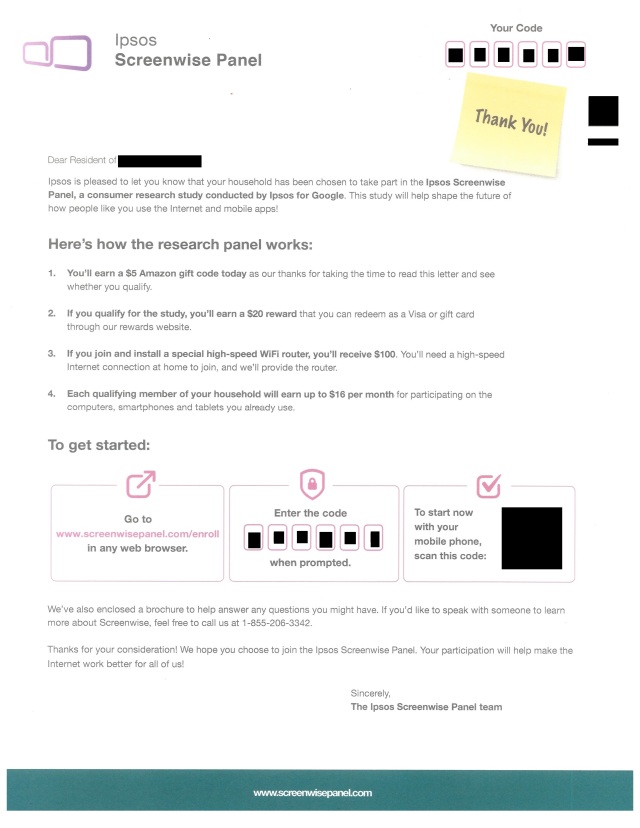 Basically, you install a Google router and an app on all of your devices and  Google monitors your activity “anonymously.”

Could get $125 right away, that’s some gas/ammo money.

Nah, actually it’s pretty easy to say “NO” to this.

I don’t trust Google and I don’t want to “help” Google in any way either.

Are shitstains on the underwear of Earth.

Although, it depends on if the router collects all internet use or just the devices that have the app.