Person 1 “Say ‘pea green soup’ after everything I say.”

Person 1  “What are you going to have for breakfast?”

Person 1  “What are you going to have for lunch?”

Person 1  “What are you going to have for supper?”

Person 1  “What are you going to do in bed tonight?”

But seriously, Split Pea Soup is one of my favorite go to comfort foods to take for lunch at work.

A quick rinse in the sink to get the dirt off. 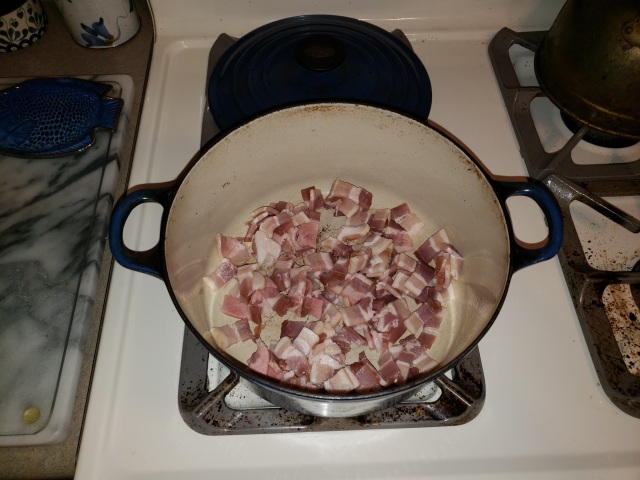 I can use many, many different kinds of pork for the soup and today about 3/4 pound of bacon gets fried up.  I leave a few teaspoons of the drippin’s in the pot and remove the bacon. 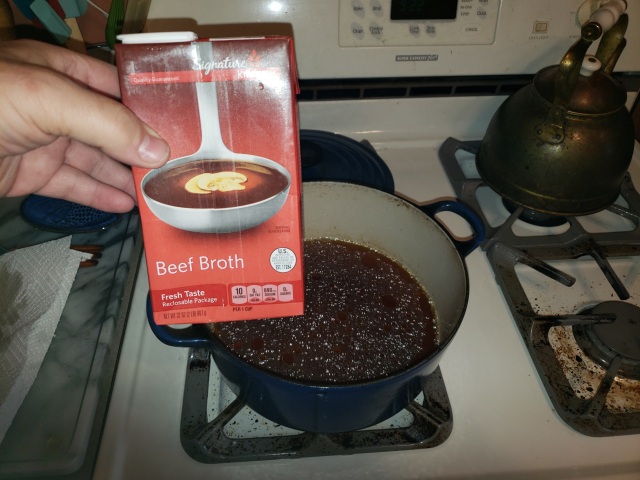 I start with beef stock.  Why use beef stock? Because I can’t find pork stock.

About 4 big shots of Tabasco for a little heat.  Sometimes toss in a few red pepper flakes or even some fresh ground black pepper.  Don’t need too much as far as seasonings go.  The pork adds enough salt and the split pea taste is what I am going for.

Run it through a strainer to get the bits of hulls and small rocks. 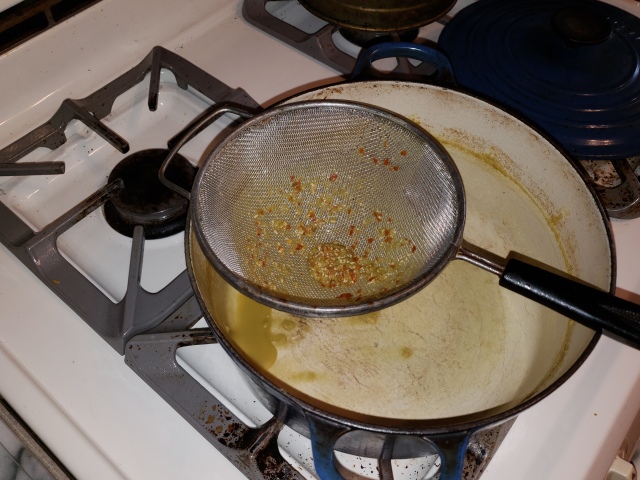 That’s all the “stuff” you don’t want to eat.

If you look at the black square and see the spillage, that’s actually pretty darn good for me !! Usually there’s a much bigger mess.

Toss the bacon back into each container, and four great lunches for the week.

THE GOOD NEWS:     The Friday before Easter, ham was on sale and I bought one.

THE GOOD NEWS:      Hams were still on sale for Easter so I bought one and froze it. 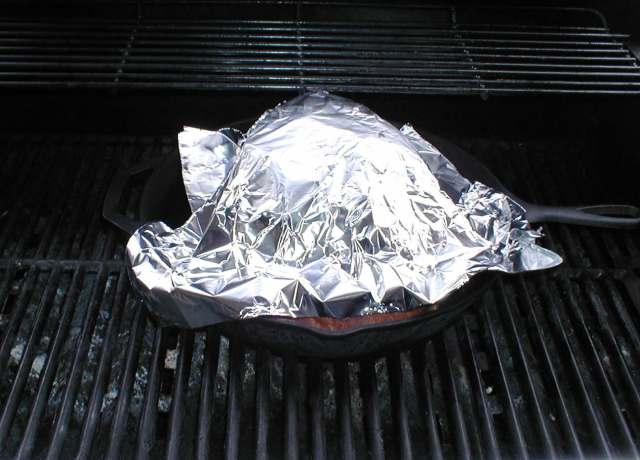 Ham out on the grill.  What?? You’ve never had “Ham Incognito?”

This would be the ham from the freezer.

Ahhh, there she be !!! A couple of hours on low heat just to warm it through. 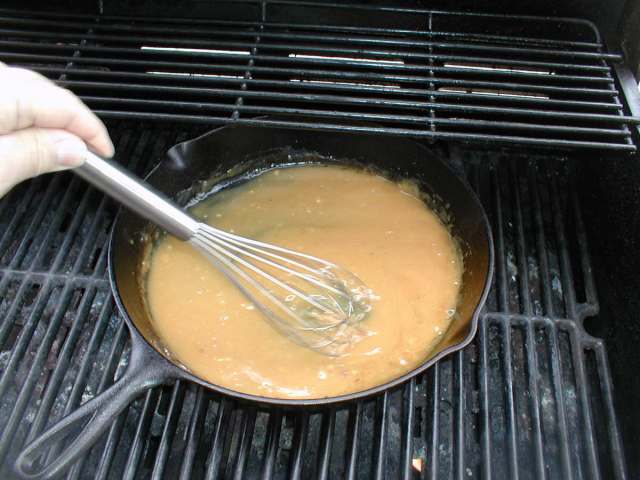 This would be the first time that I had ever tried making gravy from a ham.

Straining out the lumps and what not from the “gravy.”

Get ready Porky, the knife is coming for you ! 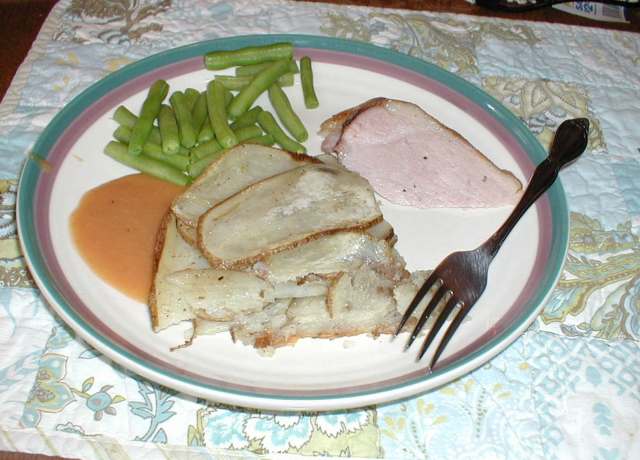 Some potato galette and steamed green beans to go with the ham.

Oh, and the “gravy.”  Now I know why you don’t make gravy with ham juices.  It was just a little bit salty. Not quite Dead Sea salty, but close. 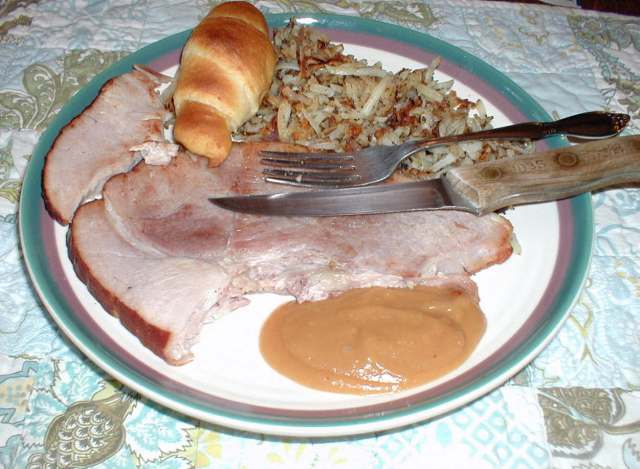 For day two of the ham, it was fried ham and hash browns.

After day two, this is what was left. 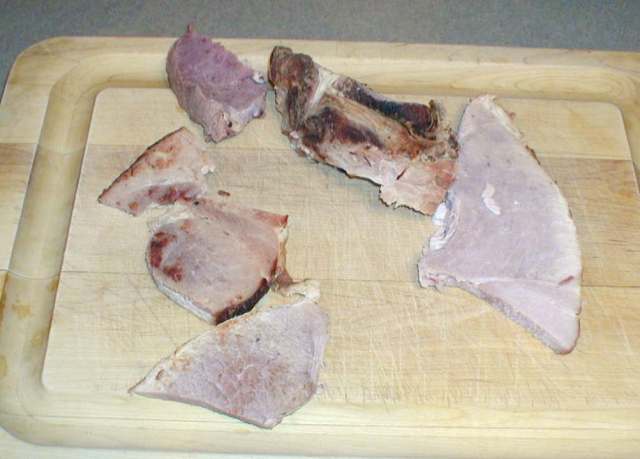 The survivors for day three. 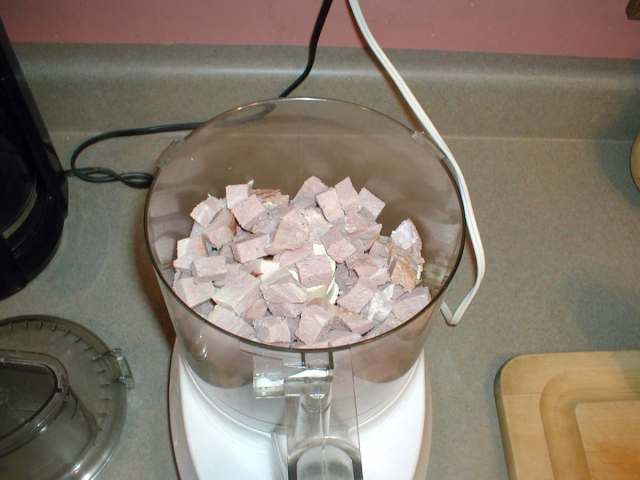 Chopped it up and into the food processor.

The fixn’s for “ham salad.”

Day four.  I’m using the ham bone from the first ham that I had saved in the freezer and the current ham. 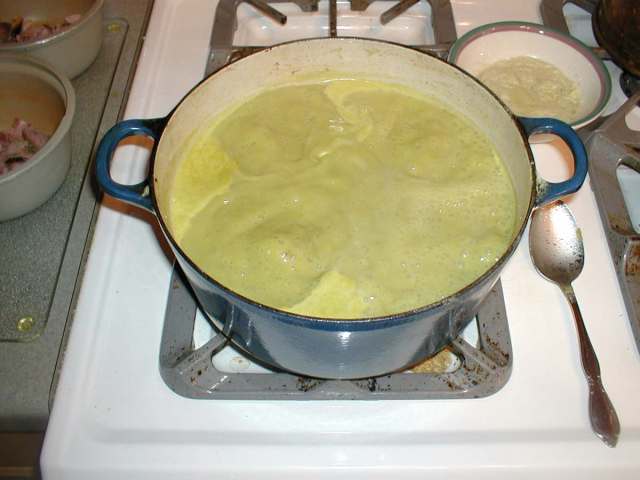 Another great pot of split pea soup that should last me a week for my lunches.

For no particular reason, I chose to make a ham this year.  The traditional American Thanksgiving is good, but it can be better with pork.

Here’s “The Ham of Truth” after being on the grill outside for about 3 hours.

Oh, those burned bits of pork are the best !!!

My daughter “made” some pumpkin bread. 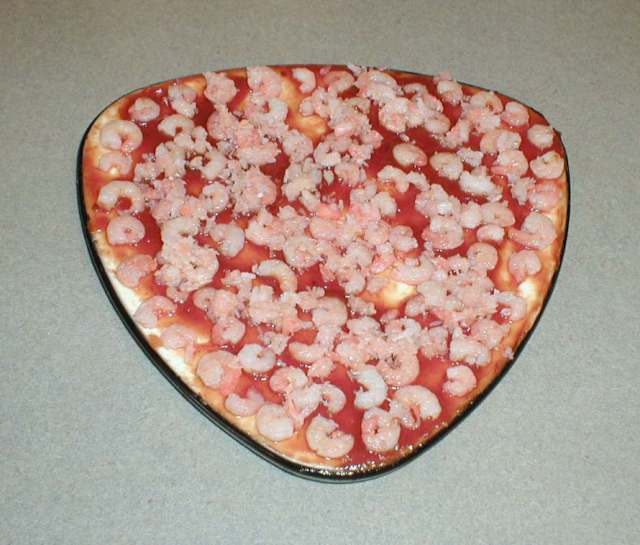 A shrimp dip appetizer.  Cream cheese spread out with chili sauce and tiny shrimp. (On crackers)

Pepper Jack and Colby cheese with smoked oysters. (or as I call them, bacon of the sea) YUM !!! 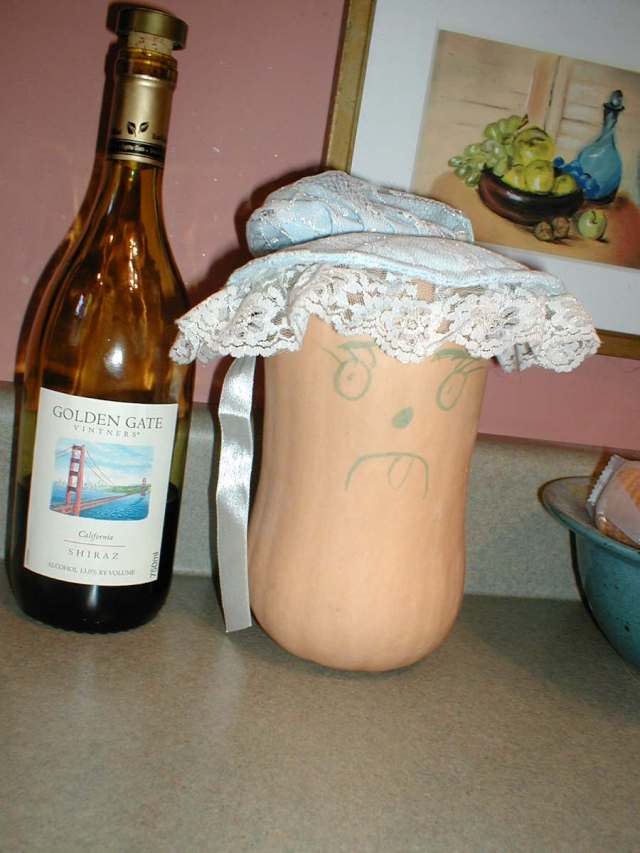 This is “Squashy”.  My daughters little sister.

As always, I was too busy doing a lot of the cooking  so I don’t have photos of the rolls, mashed potatoes and squash.

This was dinner on the Friday after Thanksgiving. 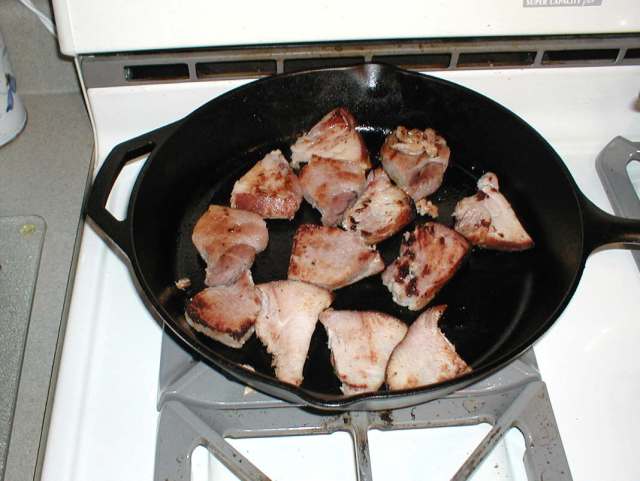 Here is dinner on the Saturday after Thanksgiving.  My daughter loves fried ham, but she was tried of it at this point !!

The wife made a Potato Galette.  If you have never had this, it’s kind of like a fried potato pie.  What’s not to like???

I still had a good amount of ham leftover on Sunday, so I made a double batch of my split pea soup.

I soaked the peas over night and even though the directions on the package said you didn’t have to soak them, they seemed to cook much faster and they creamed up better. 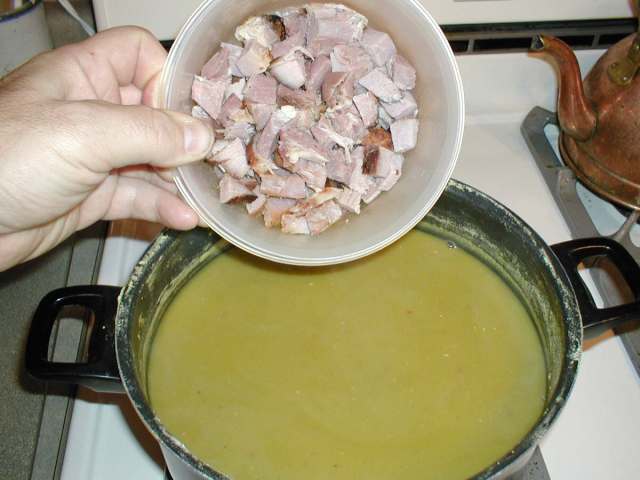 Mmmmm, adding the last of the ham.

Well, with the Fall weather beginning (HA !! 80 degrees this weekend !!) I went back to making my Split Pea Soup (with Bacon this week) 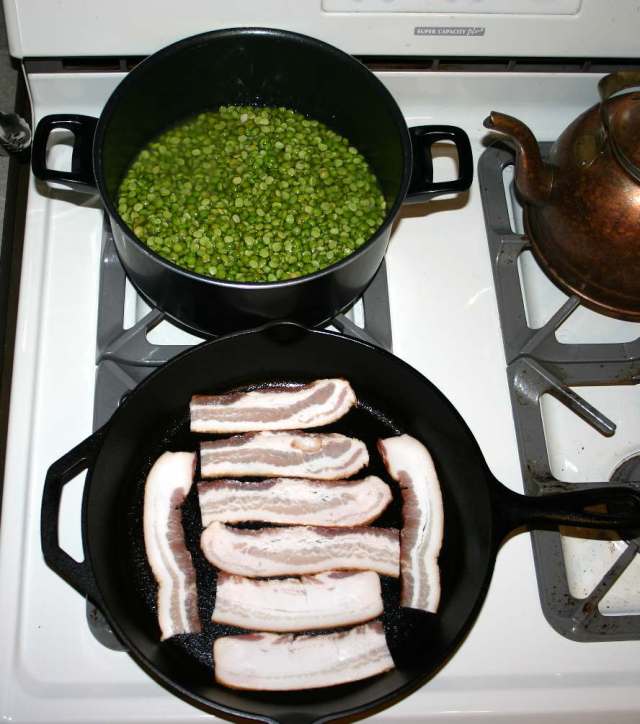 It has 16 ozs of green split peas.

The instructions on the bag say not to pre-soak them, but I have found that they cook much faster after being soaked.  Overnight in this case.

Unfortunately, I was out of crushed red pepper flakes so I added a couple of squirts of Tabasco sauce for a little zing.

Have you ever seen anything more beautiful !!??!!

And of course, the finished product !