That work makes her look worse.

Should have started with her cankles first.

John Wayne made almost 150 movies in his career.

My personal all time favorite Wayne film (in a serious role) is “The Searchers (1956).”  This is the movie that I think really showed his acting chops.

The scene at the end is iconicy turned up to 11 .

Hmmmm, he does walk like the guy in “The Birdcage.”

OK, time to get to the mustaches.

The point was that John Wayne made a lot of movies, but rarely had facial hair. 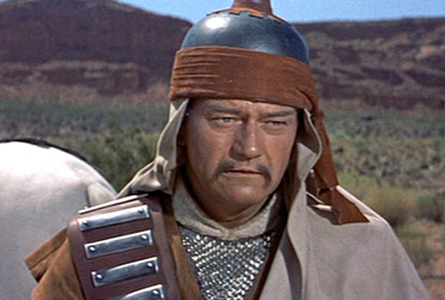 The Conqueror.  It’s like he ate hairy spaghetti yesterday and never wiped it off.

This movie may have the only movie that he wore a wig, other than his own toupee. 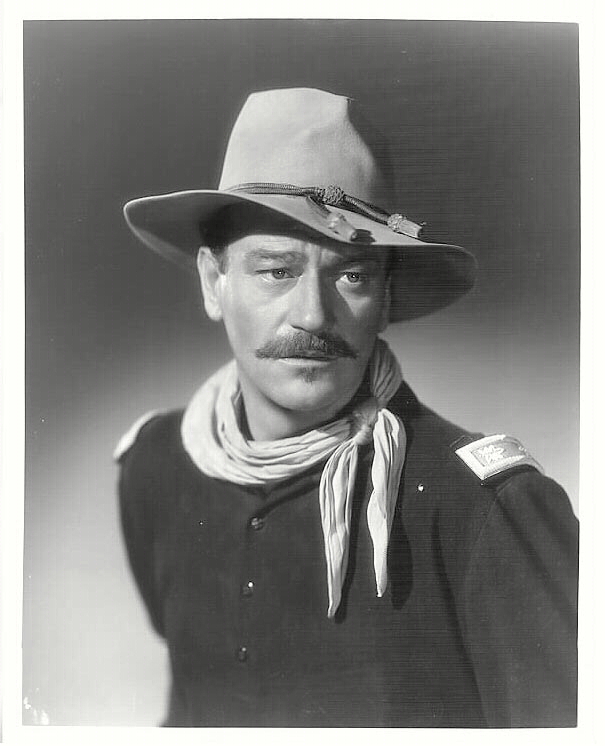 Rio Grande.  Could have used a bigger soul patch.

She Wore A Yellow Ribbon. 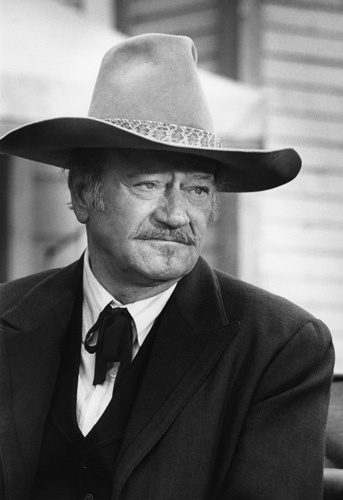 The Shootist.  Not high on my list of favorite Wayne movies.  Wasn’t really thrilled with his supporting cast.  This was a fitting mustache for an distinguished gentleman of the time.

My second favorite (serious) Wayne movie, “In Harms Way (1965)”.  A movie that was filled with great characters.  The movie was able to do backstories in minutes and develop quality characters very quickly.

The best scene in the movie is when Eddington and Powell go into the officer’s latrine and Powell flips the coin.  “Good-bye, Commander! Enjoy it!”   Eddington then proceeds to bitch slap Cmdr. Owynn and that’s the scene where Rock’s son Jere, learns what it is to be a man !!!

Maybe next I’ll do movies by The Duke’s toupees !!

I’ve had my conceal carry now for just over a year.  For the past year, my EDC was a S&W Compact 22 LR. Lots and lots of reasons for a 22 LR.  First, cheap ammo.  I am currently paying 4.3 cents a round and that is considerably less than any other caliber which means for the same money, I can shoot 6-8 times more.  That is a very important factor in that since I shoot almost weekly, I am a gosh darn good shot.  No, I will never be a marksman, sniper, trick shot artist or shoot dime sized groups on paper, but I will be able to put multiple rounds in the vital areas of a human.  Second, and this relates to the last statement made, low recoil.  “Putting rounds on target!!!”  For a lot less money, I can practice my sight alignment and trigger pulls.

I was perfectly confident in carrying my 22 LR every day but for some reason, I went and purchased a larger caliber gun.

It’s made with the S&W compact frame style so it’s almost identical in feel as the Compact 22 LR.  Instead of having a magazine safety, it has a grip safety.  I like that feature because I take my gun into the gym I go to and like that it’s not likely to go off spontaneously in my gym bag.   Also like the Compact 22 LR, it has a thumb safety.  I WILL NOT OWN A GUN WITHOUT A THUMB SAFETY.  Yeah I know I’m the odd man with that as most shooters are the exact opposite.

I checked out a lot of online reviews and watched a lot of Youtube videos about the 380 EZ.

“It’s a great gun, FOR YOUR GRANDMOTHER.” 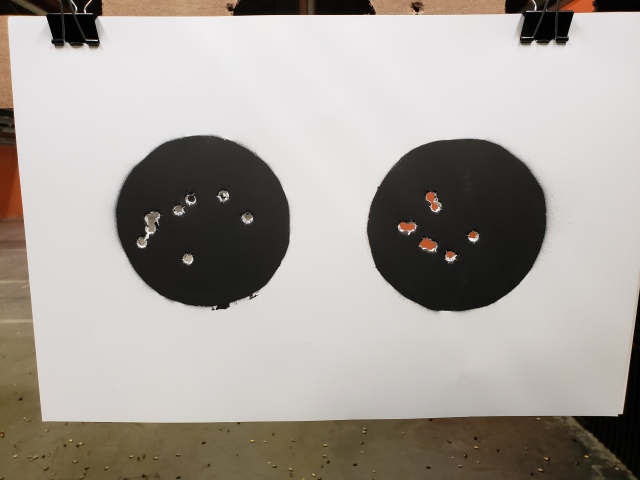 The 380 EZ holds 8+1 and above is my second time shooting it.  The first time it shot way left and by GOD the allen screw that holds the rear sight for adjustment was soooooooo tight I had to use pliers on the allen wrench to loosen it !!  But, it’s now adjusted and sighted in.  The right target was at 7 yards and the left target was at 5 yards with double tapping (4 1/2 inch circles).  So far, I am very satisfied with this gun.  Like I said earlier, my goal is not to shoot dime sized groups on paper, but to be able to hit a man sized target.

I don’t plan on shooting this gun a lot, I think I can keep shooting the Compact 22 as my primary practice gun and shoot a couple of mags a week of the 380 to keep it in tune.

Outside of family, I don’t cook for many people.  When I do, I think I get a lot of polite compliments on whatever I cooked.  Now, I am the kind of person that has a hard time accepting compliments unless I have done something remarkable.  I’d much rather I be told the truth, even if it means I didn’t do something right. (That’s how you learn to do better)

But I do get compliments from family when I cook steaks.

Someone asked what my secret was.

“Meat and heat”, really not too difficult.

In the video below, as long as you have a known temperature, it’s just timing and it’s easy to adjust for rare and medium rare.  Yes, those are the only two choices for cooking steak.

The in-laws were over and I made some really nice boneless Strip Steaks.

President Trump has given Attorney General William Barr “full and complete authority to declassify information” related to the origins of the federal investigation into possible ties between the Trump campaign and Russia.

The move is the strongest sign yet that Trump is taking serious action to “investigate the investigators” and has found a willing champion in Barr, who rankled Democrats last month when he said “spying did occur” on the Trump campaign.

“Today, at the request and recommendation of the Attorney General of the United States, President Donald J. Trump directed the intelligence community to quickly and fully cooperate with the Attorney General’s investigation into surveillance activities during the 2016 Presidential election,” White House press secretary Sarah Sanders said in a statement.

“The Attorney General has also been delegated full and complete authority to declassify information pertaining to this investigation, in accordance with the long-established standards for handling classified information,” she added. “Today’s action will help ensure that all Americans learn the truth about the events that occurred, and the actions that were taken, during the last Presidential election and will restore confidence in our public institutions.”

For many of us that have been following this fluster cluck from day one,nothing that comes out is going to be groundbreaking or earth shattering, it will just be confirmation and documentation.

Hopefully, what does get released will sway lots and lots of “average” Americans that haven’t followed this very well.

We’ve been screaming for years now about getting some of these documents declassified and un-redacted and there have been an unlimited number of political reasons it couldn’t be done.  Well, with the Mueller farce completed, it’s time to “RELEASE THE KRAKEN !!!!”

My best thought is AG Barr will release a report that tells the story from start to finish, in a way that is irrefutable and 100% documented so much that even the pathetic MSM and Democrats (redundancy noted) will have to accept it.

The process of counter investigations to defend Trump and expose the crimes of the Obama administration has moved at a disappointingly glacial pace.  I don’t expect Barr to finish until late 2019 and it definitely needs to be completed and released in time for the Democrat primaries in 2020.  The Democrat Candidate Clown Car Posse needs to be asked about the report and have their responses on record.

In August 2017, a female-owned coffee shop in the suburbs of Melbourne, Australia, made headlines by announcing an unusual policy:

The owners of Victorian cafe, Handsome Her, have found themselves at the centre of a polarising debate after its introduction of an 18 per cent “gender surcharge” for its male customers.
The vegan cafe in Melbourne’s inner north suburb of Brunswick, which labels itself as a cafe “by women, for women” stipulates three anti-patriarchal “house rules,” including priority seating for women, a premium charge for males and respect for both genders.
“House Rules, Rule #1: women have priority seating. Rule #2: men will be charged an 18% premium to reflect the gender pay gap (2016) which is donated to a women’s service. Rule #3 respect goes both ways,” the chalkboard reads in the cafe.
While Handsome Her’s main goal is to help give back to women’s charities, according to Broadsheet Melbourne who spoke to owner Alexandra O’Brien, it also hopes that the initiative that runs for one week every month will help spark conversations about the gender pay gap

Well, running a successful small business is difficult.  Here in America 50 % fail in the first year and 95 % fail within five years so it’s not shocking that this one failed within two years.  But you are going to make it extra difficult when you alienate 47 % of your potential customers by announcing you don’t like them and you are going to charge them more for no valid reason.

The idea that a man and a women doing the same job, at the same place, with the same education and the same abilities and the woman would be payed less is a flat out lie.

1000 monkeys on 1000 typewriters will eventually write the complete works of Shakespeare.

Actually, that primate would have to just take a crap on the keys and there would be a better plan than the “New Green Deal.”

AOC and her staff are collectively dumber than a bag of bunnies.

It just ain’t there.

I would have to say that a great many on both sides of the “debate” are woefully under informed.  The layman being under informed is not good, but under informed people in positions of power and influence are dangerous.

I am not by any means an expert, but for the past 15 years, every day I have read about “global warming” and there is exactly zero evidence of such.  Global warming only exists in provable false computer models. Seriously, global warming is destroyed by the simple application of “The Scientific Method.”

Bacon Time !!!!!!
Create a free website or blog at WordPress.com.