The grocery store had Rib Eye steak on sale for $5.99 lb (that’s my price point) and the wife brought home a couple of nice ones. 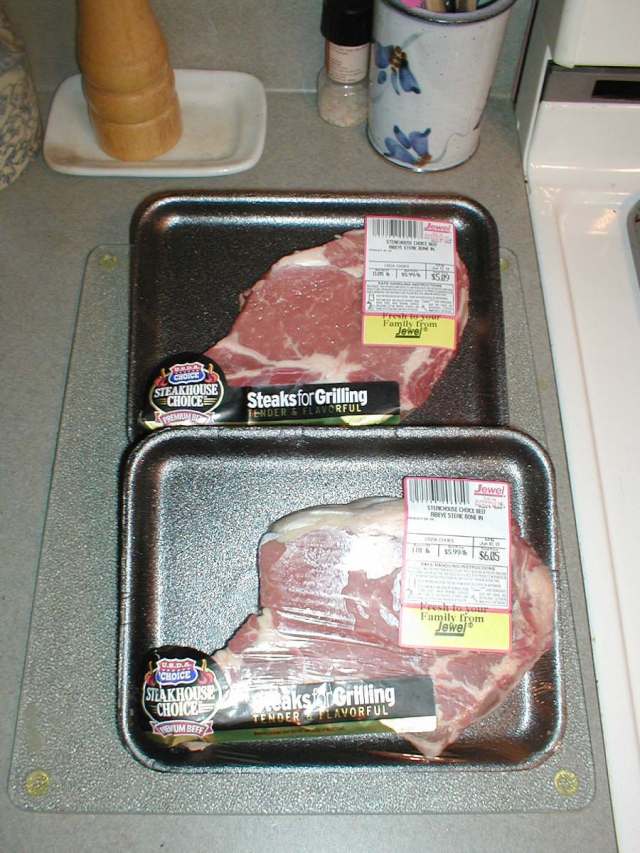 And despite my best judgement, there will a non potato vegetable with dinner. 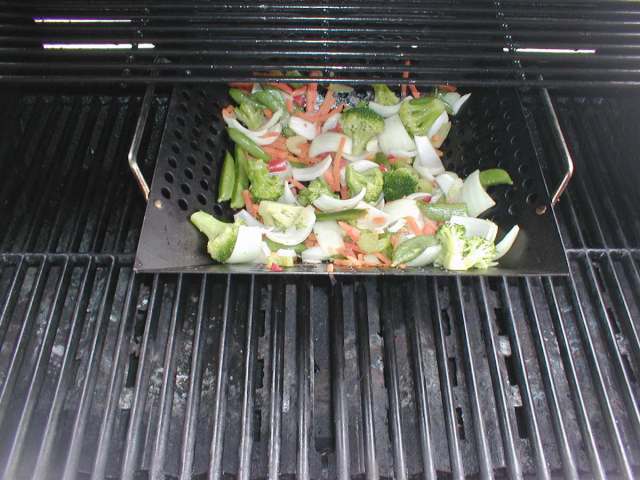 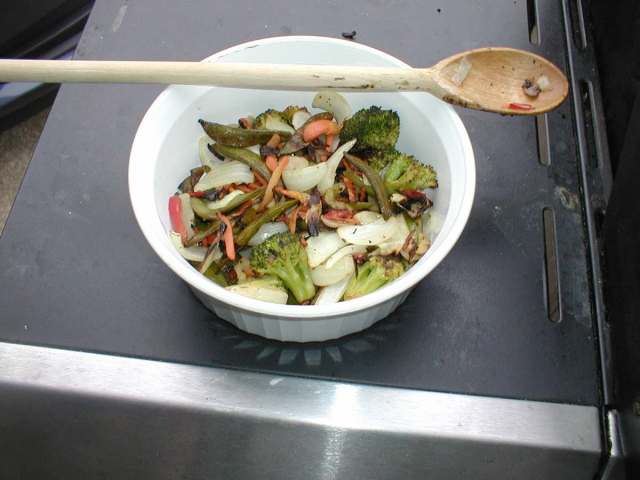 The veggies turned out OK. 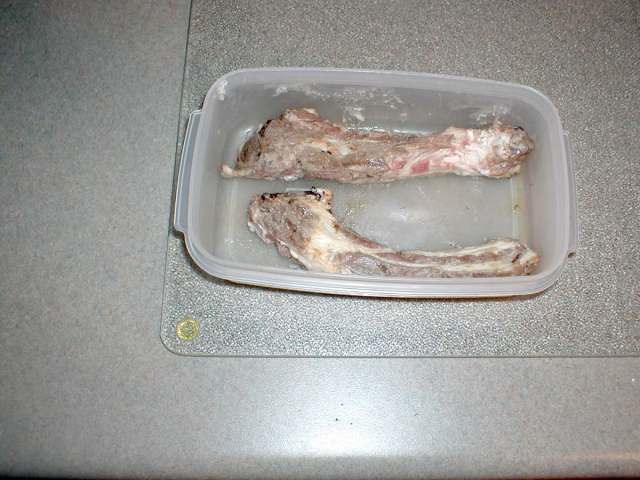 OK, for you real carnivores out there, you know what this is……………

I used to talk to a coworker about food quite a bit and he always bought his meat without bones.  He thought is was a waste of money to pay for the bone-in steak or pork chops.  I told he that he needed to try it at least once.

Well, he came to work a few days later and had cooked a couple of bone in pork chops and he was raving for days about how much better the chops tasted with the bone in.  Another convert !!!

Well, instead of gnawing on these, I thought that I would make some “Beef Barley Mushroom Soup.”

Boil them up for a beat.

Barley is a close second to my split pea for soup making.

Yep. those are the mushrooms. 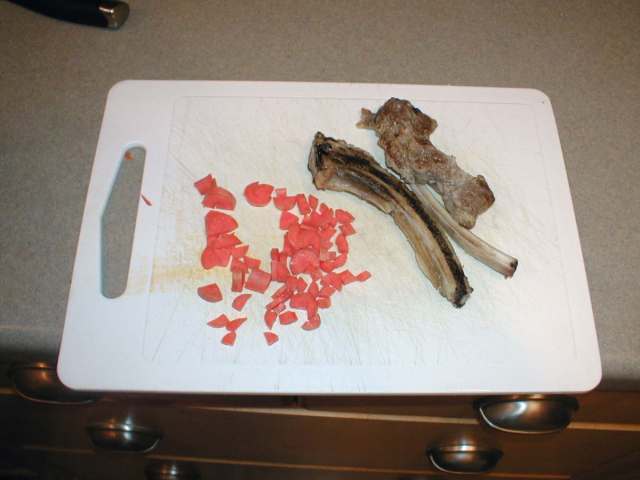 Toss in a few carrots and pick the meat off the bone. 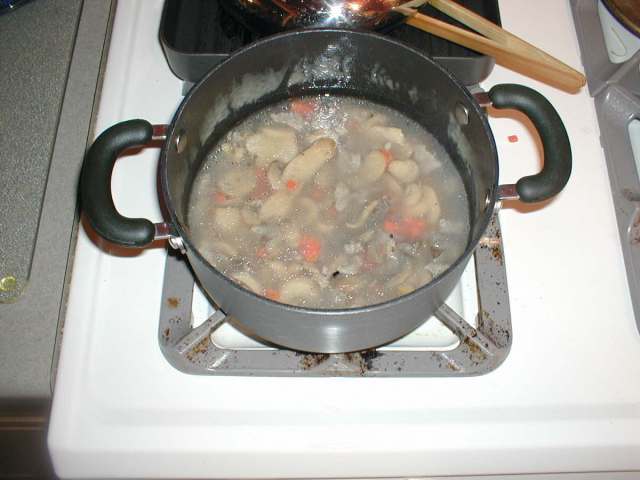 A few days of lunches for work.

Staying with the “Gruel” theme for lunch, I got another bag of barley and a can of mushrooms.

Add a slab of beef and it can officially be called “Beef Barley Soup.”

A simple browning of the beef in the dutch oven.

Toss in the drained can of mushrooms.

Add the water and barley,

All right, what did you think when you read “Gruel?”

Gruel has a negative image because it gets associated with stalags,gulags, prison camps, 19th century English orphanages etc.

Gruel is simply a grain that is boiled and has a high water to meal ratio.

I’m not sure if what I made would be considered “Gruel” because it has meat and mushrooms in it, but just looking at the finished product, it is gruelish. 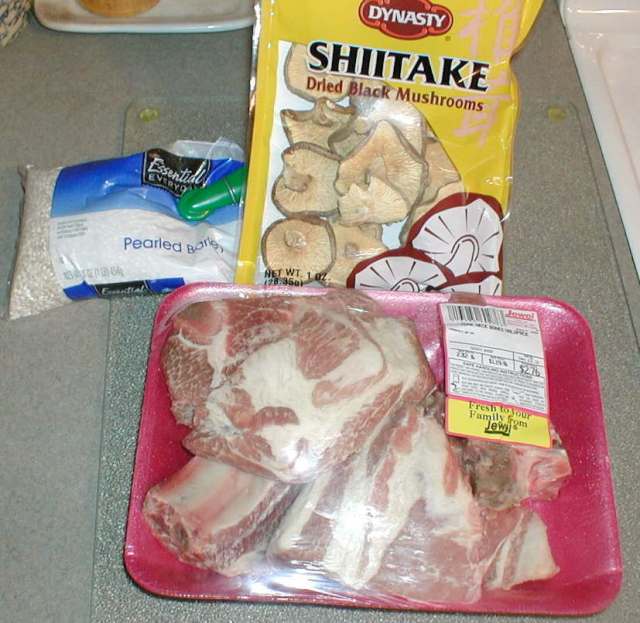 Several months ago the grocery store had a reset and the dried mushrooms were marked down to 50 cents a bag and I bought about six bags.  I did not like the way the mushrooms turned out when I made them before, so I thought that I would boil them up here, wiz them up and use that for the base of the gruel.

I also bought a package of “pork neck bones”.  At the time that I bought them, I thought that they looked funny.  I know my pig parts and these did not look like pork neck bones.  They turned out to be various cut offs from pork items and for $1.20 a pound, I think that I came out ahead.

I took the pork parts out , added the water and boiled the two packages of the dried mushrooms.

I wizzed the mushrooms up, added the barley and then tossed the cut up pork back in.

This pot made enough for lunch all week, plus a bowl to sample.