I fully understand supply and demand and am fully aware of the current guns/ammo situation, but holy &$%@ with the prices:

Today I bought ammo (and drank a beer)

I went to three gun stores to find this ammo and it’s not really the brand I wanted, but I will test it.  The past 11 weeks I literally had no opportunity to get to a gun store.  The three stores I went to were pretty much “mom and pop” type stores that I have been to multiple times before.  I was shocked when I walked in to each one and they were PACKED !!!

I don’t know if this was the continuation of the WuWho virus panic buying or if these were new customers because of the Democrat Fascist insurrection.

Taking a look at the ammo supply in my bunker, I saw I was getting a little low.

I got a nice membership to Shoot Point Blank, and I am getting there almost once a week.  Makes a nice stop on my way home on Fridays.

Because I can get there once a week, I usually only shoot about 200 rounds, but week after week it adds up and the stock on hand dwindles.

There is a group I belong to on the internet where I do surveys about autos and I GET PAID FOR IT !!!  WOOOOO !  A buck a survey but it does add up and I recently cashed out $50 for a Walmart gift card.  I also buy all of my gasoline at Speedway and earn points that I just cashed in for a $50 Visa gift card.

So, as my supply was dwindling and I had some spare money, I went out on a buying trip.  As the best of luck was with me, I also had a $10 off $50 coupon from Dick’s.  Usually the Dick’s coupon is for a $100 purchase, this was indeed quite a fortuitous find for me. 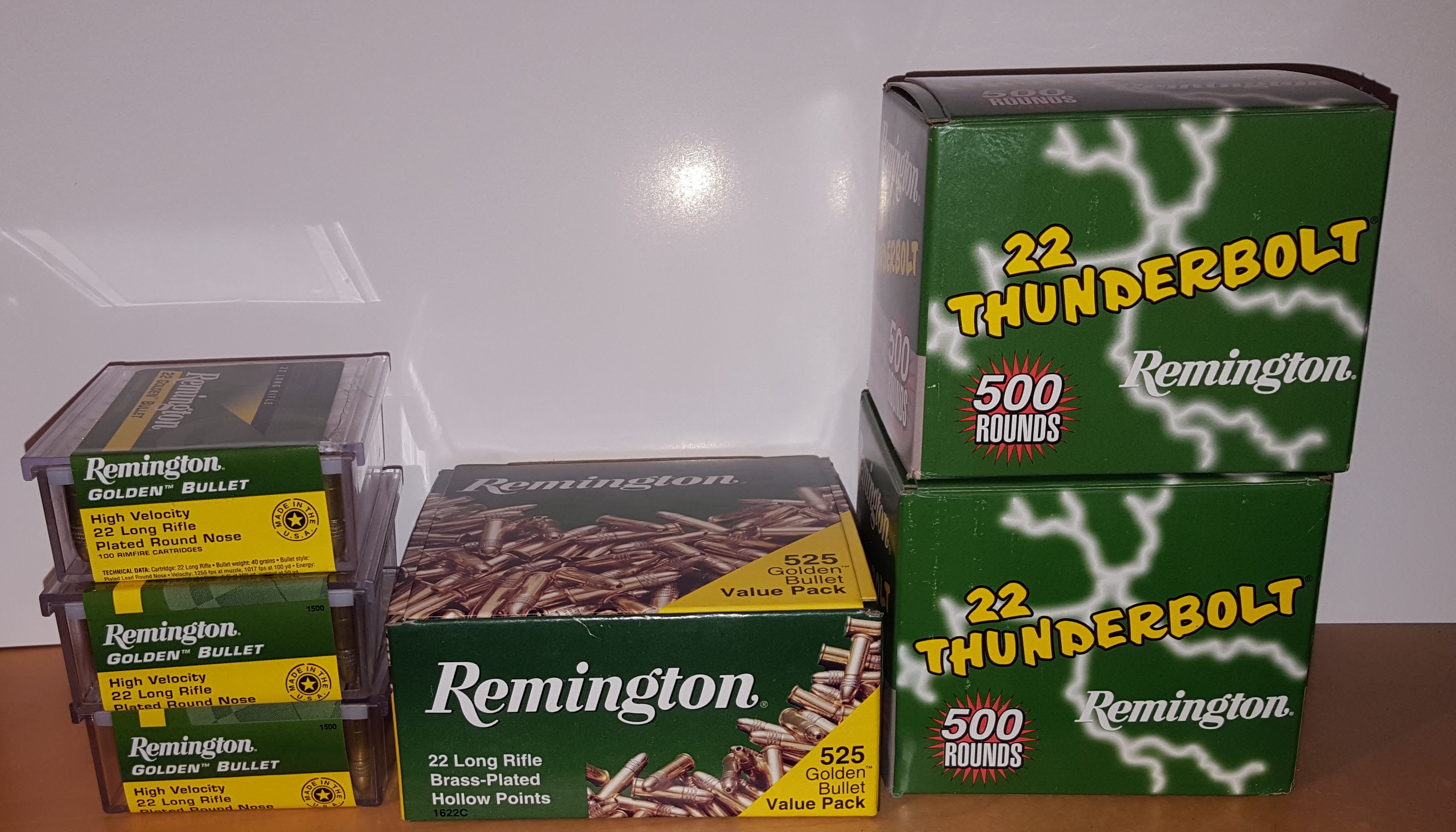 A quick run about to both Dick’s and Walmart and this is what I brought home.

1827 rounds (one box of Thunderbolts had two extra).

The best value by far are the Thunderbolts at just less than 5 cents a shot, but I like having the hollow points from the 525 Golden bullets and even though the 100 round boxes of the Golden’s are closer to 8 cents a shot, I buy those once in a while just to have the containers for storage.

Aaaaaahhhh, that looks much better.

“I’m sure glad I had just enough ammo” said no one ever after a zombie attack.

Or to quote Col. Hannibal Smith: “Overkill is highly underrated.”

Now, I was going to do a separate post on this, but it fits here.

The crazy lady known as “Mom”, is divorcing my father, and he had to clean out all of the out buildings on his property.

My dad found this ammo in his barn.  I knew for a fact that I hadn’t bought any ammo that was in the barn in the past 30 years.

Just searching in the internet, I found that the bucket of Thunderbolts were from about 1993.

I had no luck with the other boxes and I even contacted the Remington historian and they could tell me no more than around 1990-1993.

I have already used up all of this old ammo and it performed rather well. There might have been 25 total rounds that failed.

Saturday at the park, AKA, my brother’s backyard.  Made quite a few improvements from last year.  Indoor range time in my area is about $20 an hour.  If you only shot once a month or less, that’s really not too bad.  But 2-3 a month, that will add up quick.  Also, it is just a hell of a lot more fun to shoot outdoors.  Convenience is also something that is great.  I can stop by with my four loaded magazines, do some quick shooting and go.

Still looks a little “Hillbillyish” (no offense).  I pay my range dues by doing most of the grounds keeping around it.  Still have to finish the back and fill in the dirt behind, and have my brother figure out where he wants to move the rest of the logs to.

I did about 220 rounds.  I have 4 magazines that each hold 15 and always have one chambered.  I shot alone this day but reloading is when all the good discussions occur.

I can stand and shoot at paper targets ALL DAY LONG, but when the training is done, it’s nice to turn the “fun factor” up up 11 and shoot things that go boom !!

I have had very inconsistent results with the baking soda and vinegar bottles we shoot at.  Some are really cool and some are complete fizzling duds.

So, enter Mr. Wizard. (science reference from way back if you are of my age group).

Going backwards, earlier this year I tried something to make it easier to mix the vinegar and baking soda.  If you are not quick with the bottle capping, it can be a mess.  So I thought up a way to make baking soda pellets.  I did not photo document that so there is little to show.  I had some plastic trays to use for a mold that could make pellets that were about twice the size of a 45 shell casing.  I knew that just mixing water and baking soda would result in a crumbling pellet so I had the bright idea of also adding white glue.  Well crap, I had no idea that would literally make “Slime.”

I sometimes think I am a genius.   But unfortunately, it’s not the Einstein type, it’s more of the Wily E. Coyote kind.

But the pellets did dry out and they work fine except it takes quite a while for the pellet to dissolve.  Need to have that be quicker, so I have some other ideas to try.

The other more simple idea would be just to go to Aldis and buy a 12 pack of crappy soda to shoot at.

The first four bottles were only 1/2 full of vinegar.  That was the type of reaction that I was looking for !!  I was only able to find one of those bottles.  I suspect that the rest blew into the cornfield.

NOTE TO SELF:   Put another bucket under the middle of the plank.  Tired of the first shot knocking down other targets.

The next three shots were a 50/50 mix and the bottle was full.  Two of the bottles were through and throughs with jumpy, fizzy bottles.   Kind of cool, but not as cool as the first four bottles.

Next four were a 25/75 vinegar/water mix and the bottles were full.  3 of the shots were the “Jumpy Fizzy” kind like the previous 4 but the third shot that jumped straight up in the air was kinds cool, still not as cool as the first exploding ones.

The rest of the aluminum beer cans were full with a 50/50 mix.  Almost all of them had a good explosive result.

The results of the experiment?

I haven’t a clue.

If the beer cans weren’t as almost explosive as the first four, I would think having a half full bottle was better.

The good news is that I will get more bottles and blow more stuff up !!!!!

Just wanted to take a little look at the shot placement on the bottles.

Only had one of the first bottles and it went at about the middle of the vinegar level.  Interesting that the round went out the back, but there was damage to the bottom of the bottle.

The number twos had good solid hits.  Can see the two that were jumpy & fizzy.

The number threes were all low shots.  The bottle with the damage on the bottom must have been the one that went sky high up.

Always have to clean up at the end of the day.  My dad’s property is next door and he doesn’t like seeing any messes or having any of the debris blow around.  My brother’s place already has too many hillbilly piles of  “stuff” around.  He’s a hard worker and very industrious so I can’t give him any crap about that.

I even clean up the brass on the range.  Brass laying around is kind of cool and adds to the ambiance, but I pick it up to take to the scrapyard.  Get a few bucks back to buy more ammo !!  The .22 casings have almost no weight, so it takes a long time to accumulate.

Done shooting the bottles and now going to use my last magazine to try some quick double shots.

I’m going from a low ready and shooting.

OK, that ain’t too bad for quick shooting !!  I’d like to say that I am just a freaking bad ass spot on shooter, but really, I think a lot of that was luck.

Well, so ends another good, safe day at the range.